Bank of New Zealand is to have a new earthquake-resilient and "green" 12-storey building as headquarters for its 1500 hundred staff in Wellington.

It will replace the BNZ's former landmark headquarters, a fairly new building on Waterloo Quay and owned by Wellington port company, Centreport, which was badly damaged in the November 2016 Kaikoura earthquake and is now being deconstructed and demolished.

The new building will be constructed on the 1 Whitmore Street site where a Z Energy petrol station stands. Key resilience features are base-isolation and a diagrid structure, as well a Green Star design.

BNZ expects to occupy the building in 2023. 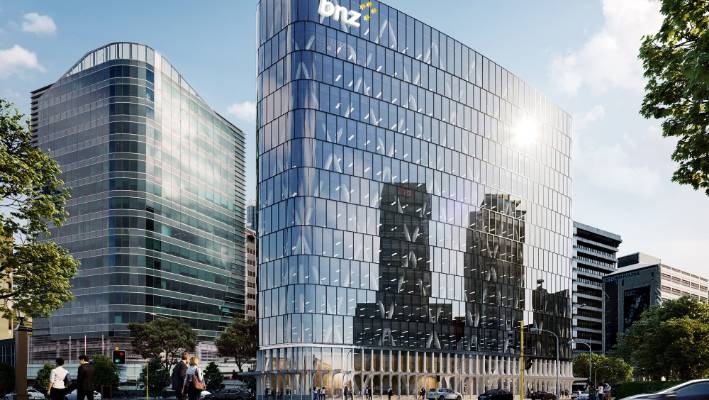 SUPPLIED
An illustration of a new 12-storey base isolated building at 1 Whitmore Street, Wellington, whose development will be managed by Newcrest and it will be leased by BNZ as their new headquarters in the capital.

BNZ staff are spread across three central Wellington sites on The Terrace, in the Spark Building on Lambton Quay and in Ricoh House in Victoria Street, following the Kaikoura earthquake.

The former headquarters at the port was one of several buildings deemed irrepairable after the 7.8 magnitude Kaikoura earthquake. It was built on reclaimed land between 2006 and 2009.

BNZ executive general manager technology and operations, Russell Jones, said the building was one of the most seismically-advanced developments in New Zealand with a strong diagrid structure and base isolation, designed to avoid structural damage in a 1 in 500 year earthquake.

BNZ had secured a 15-year lease including naming rights to the building, which would have about 18,000 square metres of space. Design was at an early stage.

It would be a great place to work for BNZ's Wellington staff and for customers to visit, he said.

The One Whitmore Street development is being managed by Auckland developers Newcrest which recently completed the nearby award-winning office building at 20 Customhouse Quay, called the Deloitte building.

One Whitmore Street is owned by a joint venture between Newcrest and Steve Owen, a Wellington-born private investor.

The Z Energy fuel station on the site will close and be demolished for work to begin on the new building. Z Energy has other central Wellington petrol stations at 174 Vivian Street and 155 Taranaki Street.

BNZ said construction was expected to complete in mid to late 2022 with BNZ expected to occupy in 2023.

Lincoln Fraser, director of Newcrest, said the building's upper 12 levels of office space would each have more than 1400 sqm of lettable area with three-metre-high ceilings throughout and floor to ceiling glass.

The ground floor would feature a café in a north-facing, over-height lobby extending around six metres up to the ceiling.

That won a gold award at the recent INNOVATE NZ Awards of Excellence for its outstanding structural engineering design and the Overall NZ Supreme Award at the Excellence in Steel Construction Awards, he said.

The design with base isolation and a diagrid structure would far exceed Building Code requirements.