A small house is causing big issues for a Lower Hutt man determined to prove what he's built is a vehicle and, therefore, requires no resource consent.

After years of scrimping, saving and calling in favours, Jono Voss's dream of building his own tiny home was finally becoming a reality, but several months into the build, bureaucratic disaster struck.

"I was approached by the Hutt City Council, namely the resource consent enforcement officer, who asked me if I had consent for my 'building' ... I said no, it was a vehicle and it's just gone on from there."

Voss - who designed the build to have wheels and be treated as a vehicle under law - was issued a notice to fix (NTF) by the council, meaning he either had to remove or demolish the house; or spend thousands of dollars to comply with the building code.

Having sunk close to $100,000 into the structure already and successfully registering it as a trailer with the NZ Transport Agency, Voss was determined to fight the notice and complete his dream home.

"I have spent all my savings and taken loans from friends to fabricate this tiny house in the hopes of having something to call my own." 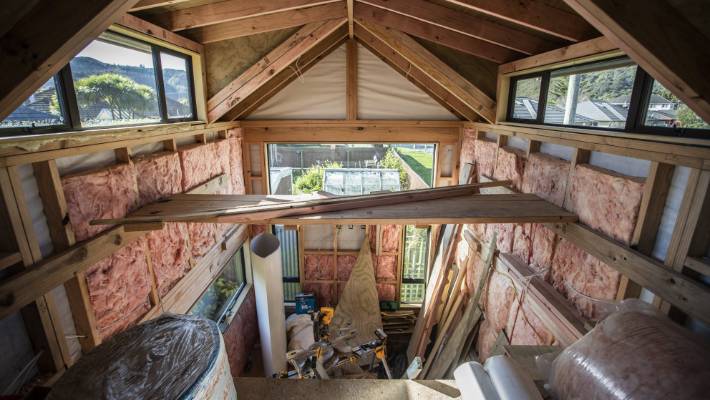 The structure, which measures 8 metres by 3.2m and 4.5m high, currently sits on a friend's Taita property unconnected to power, water or waste services. It would be able to be moved off the site "in about a day" once it's wheels were affixed and as long as it was guided by a pilot vehicle, Voss said.

He believed that because of that, the build would not come within the jurisdiction of the Building Act unless it was both immovable and permanently occupied.

Helen Oram, acting manager city transformation at Hutt City Council had been in contact with Voss to clarify the council's current position on tiny homes and other small residential units.

While the council had been talking with the community about changing the rules in the District Plan to encourage more intensification in residential areas, those plans had not yet been agreed to.

"It may be, in the future, easier to establish a tiny home in Lower Hutt. Until we find out if these changes to the rules have been agreed to, the current rules apply."

Voss's house currently did not comply with the rules, Oram said.

Read the full article and watch the video on stuff.co.nz here