Cracks hidden in the concrete foundations of 'thousands' of Christchurch homes

It is the issue that will have to surface eventually. Why are people saying both slab and ring foundations were systematically under-scoped following the earthquakes? JOHN McCRONE investigates.

You want his guesstimate? Auckland concrete expert Bevan Craig reckons there could be still tens of thousands of houses in Greater Christchurch at risk of having unacknowledged earthquake damage to their foundations.

He says even now, nine years on from the Canterbury earthquakes, new cases like one he is inspecting today keep emerging.

Craig, of Underfoot Services, has flown down with his "divining rod" for another week of structural checks for home-owners like Tracey Glass.

Glass bought her West Melton bungalow in 2014. On the stony ground of the rural outskirts of Christchurch, with a clean property report and no visible cracks in its Gib, exterior walls or marble kitchen floor, it seemed a safe bet, she says.

But in July, she was getting the en suite bathroom freshened up. "I was thinking we might stick the house on the market in spring and move back into town again."

The carpet fitter discovered a lacework of cracks in the concrete slab floor. Now Craig is here to check over the whole house properly.

With a metal sounding pole, he taps his way across the carpet in the living room methodically. It rings solid near the walls then gives a tell-tale thud towards the middle. Glass says even her lay ears could pick that up.

A small square of carpet is removed, revealing a ragged fracture wide enough for Craig to wiggle a finger in. 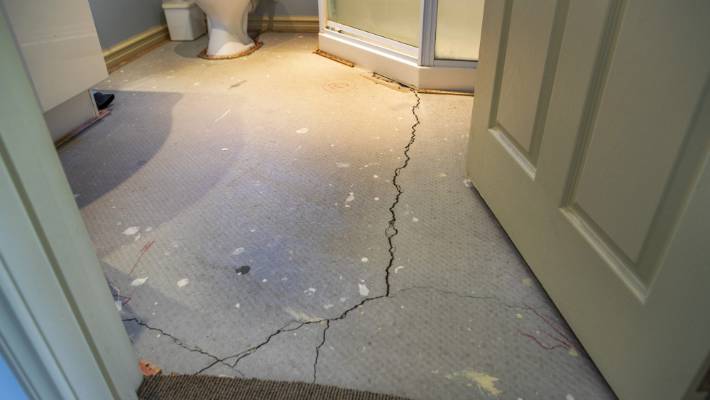 As he half-expected, the foundations were built without wire mesh reinforcement - a shockingly penny-pinching practice Christchurch building codes allowed right up until the earthquakes.

So no surprise the concrete slab shattered, even if the broken pieces have stayed pretty much in place.

To find out how bad it is, Craig drills a hole alongside the crack. The long snake of an inspection camera is poked down into the sand and stone sub-base. He invites Glass to take a look.

Craig has warned the worst damage is often buried out of sight beneath the concrete itself. Quakes can churn up the sub-base, leaving the slab floating above a void.

Again, cheapskate building practices didn't help Christchurch, he says. Where Auckland uses crushed quarry rock that is strong and triangular - more likely to stay locked in place - the South Island fills its foundations with local greywacke river stone, cheap and abundant, but also soft and round. A material that shatters and slides.

"You can imagine in an earthquake, all these smooth river stones get shaken up. The fines, the sand, also wash away. The slab on top can't follow and so voids are created," Craig explains.

In Glass's case the slab did crack. But Craig is finding houses where the deeper problems remain completely hidden. Especially where the land is soft and damp.

"The sub-base can carry on repositioning itself. So the void will be growing bigger and bigger until finally the slab can't take it anymore. You get a bang, a dishing of the floor, because the walls were the only thing keeping the slab in place."

Through the scope, Glass can see the cavities Craig refers to.

And there it is. One minute, the proud owner of a smart home with a ratings valuation of $1.27 million. The next, not knowing quite where you are.

Glass says it is not as if the Earthquake Commission (EQC) never assessed the property. Records show a claim was settled after the quakes - for a buckled garage door.

Now her house could be a tear-down. Or at the very least, Craig is warning the broken floors will need to be excavated right down to the sub-base and rebuilt.

THROWING ANOTHER $1B AT THE CITY

It is worth repeating. Greater Christchurch is nine years on from the Canterbury earthquake sequence. Yet so many homes may still rest on unacknowledged foundation damage.

Paul Finch, a Rangiora engineer and project manager, and David Townshend, a Christchurch property investor and member of the EQC Claimant Reference Group, say Craig is right. The problems are way bigger than anyone wants to admit.